You may be unfamiliar with the Milking Shorthorn breed, and are therefore unaware of the breed’s several advantages in today’s dairy industry. Here’s a quick list…

Milking Shorthorns are a very old and established breed, and is currently regaining popularity in Canada as a very efficient and profitable breed of dairy cattle. The breed was established in the 18th century in Northwestern England, in the Valley of the Tees River bordering the counties of Durham, Northumberland and York. Bates and Booth established a “dairy-type” strain of Shorthorns on their farms in the region, and that strain has remained until this day.

Until the early 1990’s, they were known as Dual Purpose Shorthorns in Canada, but this name was changed to reflect the changing genetic focus of the breed. Canadian Milking Shorthorns also have cousins all around the world, known by many different names. The breed is known as Dairy Shorthorn in the United Kingdom, while the Australian Illawarra breed is largely founded on Milking Shorthorn genetics with some other red breed influences. The United States, Ireland and New Zealand also have growing populations of Milking Shorthorns.

There are Milking Shorthorns present in all provinces of Canada, and there are active members in nine provinces. 2015 was the best year for registrations in over 20 years and there has been steady growth in the breed population in the past few years. Breeders in various parts of the country that are looking for an efficient dairy cow that is a pleasure to work every day are increasingly showing interest in our red, white, and roan cows.

The past few decades have seen Milking Shorthorn breeders incorporate outside red breed genetics at varying levels, in an effort to increase the genetic diversity of the breed as well as adding desired improvement in certain traits, while retaining the unique and beneficial management traits found in the Milking Shorthorn breed. Red Holstein, Australian Illawarra, Swedish Red, Norwegian Red, and Ayrshire genetics have been used to varying degrees, but the majority of Canadian Milking Shorthorns are 75% purity and higher, with a significant number of animals still maintaining purebred status.

In the past decade, Milking Shorthorns have increased average milk production and overall dairy character, while retaining the structural soundness and feed efficiency that has long been characteristic of Shorthorn cattle. Fat percentage usually averages 4.0%, while protein percentage often averages from 3.3 – 3.5%. Improving fat and protein percentages has been an emphasis in recent sire selection.

Milking Shorthorns are also known for their structural soundness and longevity. Most cows are productive for five or more lactations, and the top cows in the breed produce in excess of 10,000 kgs per lactation as mature cows.

Milking Shorthorns have very few problems with feet and legs, allowing the producer to cut out the expenses of lost milk production, veterinary bills, and replacement animals due to feet and leg difficulties. Both cows and heifers are easy calvers and excellent mothers, substantially decreasing calf mortality or unthriftiness.

One of the greatest contributors to decreased milk production is mastitis, so any way to decrease this condition is very important. The Milking Shorthorn breed also has one of the lowest average somatic cell scores in both Canada and the United States. It has also been shown by studies in Idaho that Milking Shorthorns in the same herd as Holsteins suffered statistically less incidence of metabolic diseases such as milk fever and ketosis, and of other conditions such as abortion, lameness, and dystocia (Lee, 1995).

Another attribute seen in Milking Shorthorn herds is an advantage in reproductive efficiency. Breed averages from the Canadian Dairy Network show the Milking Shorthorn breed to have the highest non-return rates of any Canadian dairy breeds, resulting in fewer days open and a shorter calving interval. This results in monetary savings, regardless of production system!

Finally, the most important input cost in dairy farming is feed, so finding a more efficient alternative to turn feed into milk is very important. Gross production of milk is being increasing dismissed as the primary indicator of success, instead, the efficiency in which feed is converted to milk is the key to profitability. Milking Shorthorns perform well on forage and are particularly noted as effective grazers. 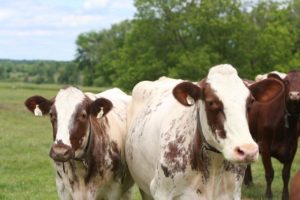 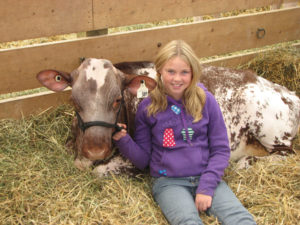 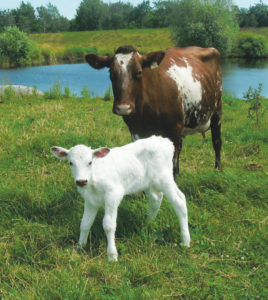 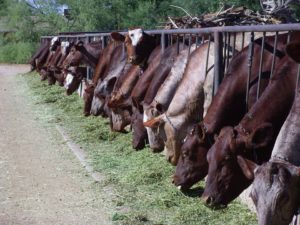 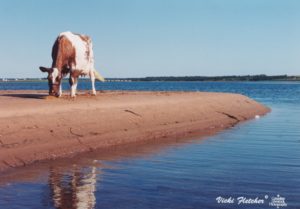 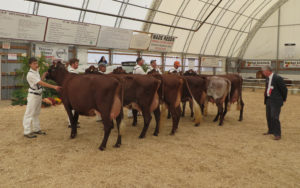