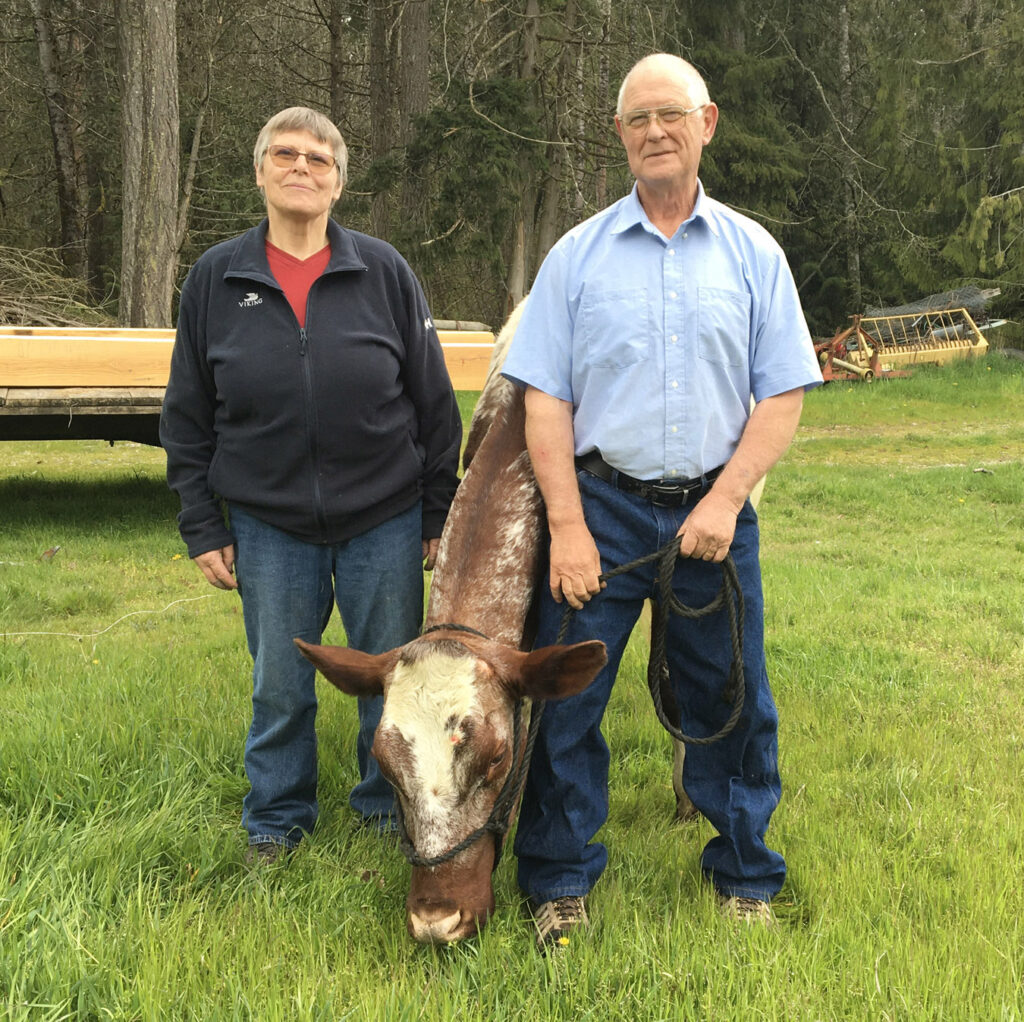 The Canadian Milking Shorthorn Society is pleased to recognize Brodie and Brenda Cupples of Errington, British Columbia with the Distinguished Service Award this year. Brodie and Brenda made significant efforts to re-establish the Milking Shorthorn breed in Western Canada as well as providing service to the Society over many years. In the late 1980’s, the Cupples’ moved from British Columbia to Thorsby, Alberta, where they acquired land at a more reasonable price and established a farm to grow their young family. Brenda grew up on a Holstein and Jersey farm on the Saanich Peninsula of Vancouver Island while Brodie was the son of a medical doctor.
Looking to add some colour to their Holstein herd, they began to acquire a few Milking Shorthorn heifers in the early 1990’s.  Brenda and Brodie supported the breed sales by purchasing the very finest quantity, including purchasing eight head (including the top seller) in the National Sale in 1992. Their purchases had to endure the cost and anxiety of transportation from Ontario to Alberta, which speaks to the Cupples’ dedication and support to the breed. Production and type was the objective, since a Milking Shorthorn cow in the Northend barn had to endure very strong competition with the very fine Holsteins members in the herd.
Their ingenuity created an opportunity for the re-introduction of the breed into Western Canada after many decades. This was an era in which the breed was radically changing in type and production. Brenda and Brodie participated in this re-imagining of the breed and its place in the dairy industry.  Brodie and Brenda promoted the breed in Western Canada where they could. They promoted the breed at the Western Dairy Expo in Leduc, the dairy capital of Alberta for many years during one of the most inconvenient times of the year, during haying season in June. They have provided breeding stock to new breeders in the Western Provinces, first from their farm in Alberta before moving to a new farm on Vancouver Island in 2013.
Both Brodie and Brenda have served the breed on the Board of Directors and on a number of Society committees.  Brodie became a director for the first time in 1995, serving until 2004.  Brenda served as a director representing Western Canada from 2009 until 2020. Brodie and Brenda’s dedication to the breed and dairy industry made a noteworthy mark in Western Canada and makes them worthy recipients for this honour.
The Society periodically awards the Distinguished Service Award to those that have made a significant contribution to the Milking Shorthorn breed in Canada. Potential nominees can include current or former breeders or past or present CMSS staff members. Considerations for eligibility include lifetime contributions to the breed, service to the Society as a director, committee member, sale or show volunteer, and promoter of the breed to the larger dairy industry. Recipients of this award also receive an honourary lifetime membership to the Society.  The Cupples’ were nominated for this award by former Society Secretary James Knott.