Prinsville Pingerly Star, a seven year old cow bred and owned by the Prinzen Family of Prinsville Dairy Farms in Bloomfield, Ontario, has been voted the Canadian Milking Shorthorn Cow of the Year for 2022.  Canadian Milking Shorthorn Society members submitted their votes by July 1st and the winner was announced at the CMSS Field Day and AGM on July 23rd in Dromore, Ontario.

Nominees for CMSS Cow of the Year are evaluated based on their own merit (production, classification, show winnings, genetic indexes) as well as the merit of their progeny.  Star, classified EX-90-2E, has a top 305 day record of 9419 kgs of milk at 4.8% fat and 3.2% protein, with BCAs of 307-371-300.  She has produced more than 32,000 kgs of milk in 4 lactations and is the #7 Active LPI cow in Canada (Aug’22).  Star was also Reserve Grand Champion at the 2017 National Milking Shorthorn Show in Lindsay, Ontario, following in the footsteps of both her dam and grand-dam, who were both previously named Grand Champion of the National Show.

Runner-up for Cow of the Year honours in 2022 was Oceanbrae Ironman Ginger EX-91-3E, bred and owned by Oceanbrae Farms of Belmont, Prince Edward Island.  Ginger is also a past Reserve Grand Champion of the National Show, along with a top 305 day record of 10037 kgs of milk at 5.1% fat and 3.9% protein in 5th lactation. 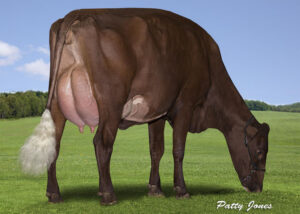 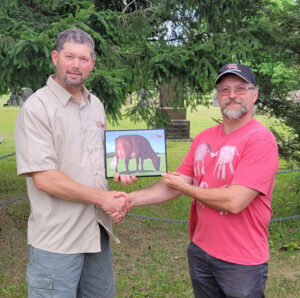