Oceanbrae Farms is a multi-generational farm on the shores of Malpeque Bay in Prince County, Prince Edward Island.  The Barrett Family has been actively breeding Milking Shorthorns since 1950, and the farm will be celebrating its 100th anniversary next year.  Fred Barrett and his wife Margaret shared their first Master Breeder award with Fred’s parents Keith and Sylvia, the culmination of many years farming in partnership with his father.  This year, Fred and Margaret celebrate their second Master Breeder recognition with their son Matthew and daughter-in-law Chandler, the fourth generation of Oceanbrae Farms.  In addition, Fred and Margaret’s son Ryan is involved in the farm in a part-time capacity, assisting with field agronomy and marketing of genetics.

For many years, the Oceanbrae prefix has been well known across Canada and internationally for expertise in Milking Shorthorn breeding.  The Barrett’s have sold Milking Shorthorns to producers in every Canadian province as well as to several US states over the years.  In addition, Oceanbrae embryos have been exported to the United States, United Kingdom and New Zealand, while five Oceanbrae-bred bulls have entered AI in the past fifteen years, including the current #3 LPI sire, Oceanbrae Royal Bentley.

“Our goal is to breed highly productive cows with well-attached udders and sound feet and legs that will breed back quickly and survive in the herd for more than five lactations,” says Fred.  “In the last ten years of so, we’ve put a lot of focus on improving fat and protein production in our herd.  In that time, the average fat percentage in our herd has risen by more than a full percent, which we feel has increased the profitability of our farm.”

Oceanbrae Farms has been ranked as the #1 Lifetime Profit Index (LPI) Milking Shorthorn herd in Canada for several years and has also been the top ranked Milking Shorthorn herd in Canada for average BCA for many years, receiving the Society’s Clydagh Trophy.  During the twelve-year window evaluated for this award, the Barretts bred 30 Excellent cows, 24 cows scored between Very Good 87 and 89, 96 Superior Production Awards, 32 Lifetime Production Awards, 20 BCA Class Leader Awards, and three proven sires in the current Top 20 LPI sire list.

The Barrett’s currently milk approximately 75 cows in a modern free-stall barn built in 2019, including sand bedding and computerized grain feeders.  Milk cows are rotationally grazed from late May to early October and supplemented with a partial mixed ration.  The rest of the year, cows are fed twice a day with a total mixed ration consisting of high-quality alfalfa silage and hay, corn silage, grain corn and/or barley, soybean meal, and a Belisle mineral supplement.  Bred heifers are also extensively pastured.  The farm also maintains a small cow-calf herd of purebred Simmental beef cattle and does a small amount of cash cropping of corn and barley.

The Barrett’s maintain a passion for the Milking Shorthorn breed and are continuing to plan for the future by building on the success of the past.  Congratulations to the Barrett family on their second Master Breeder award! 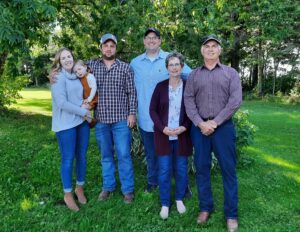 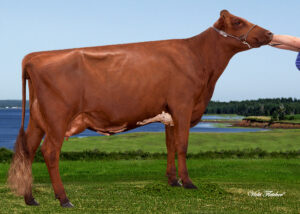